When first planning our trip, Mexico City was not on our itinerary at all. However, as we began to plan more in depth, we realized it was a place we had to go. It held too much history, too much wealth about murals and Chicano art. It was and still is home to too many progressive artists, activists, and thinkers who are the roots of this project. We learned so much in our six days there that we will incorporate into our classrooms in September.

While in Mexico City, we walked more than 50 miles with at least two (usually three or five) destinations a day. While most every place we went contributed to our learning, below we want to highlight some of the brightest spots–places we found unexpected friendship or beauty or knowledge–below.

First (and without which many of the stops below could not have happened), The Red Tree House. This bed and breakfast where we stayed for the first four nights was the perfect way to orient ourselves to the city. Besides beautiful rooms, a garden, and cheerful common spaces, the staff, smiling and full of advice, took an interest in our project and in us. They helped us plan outings (such as our private tour with Street Art Chilango, our tickets to Friday Kahlo’s home, transportation to Toluca, and even reservations at Pujol) recommending and prioritizing places we should go. Huge thank yous to Alex, Jose, Victor, Craig, Yaya, and Carlos! In addition to the staff, The Red Tree House hosts breakfast and happy hour, which we attended each day we were able. In those exchanges, we learned from other visitors about where to go, what to see, and shared our days (mistakes and all) with them.

Dining Room looking out on the Garden (Red Tree House)

Breakfast at the Red Tree House 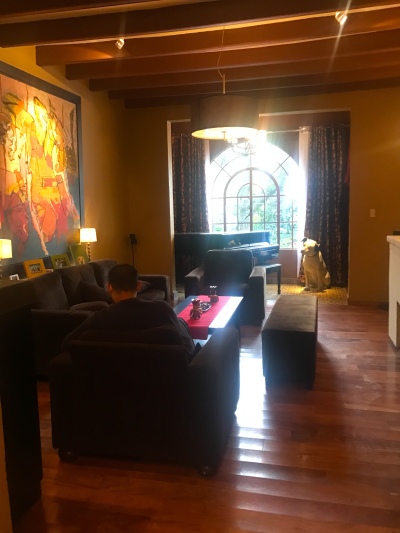 On our first full day in Mexico City, we visited the ancient city of Teotihuacan with a group of people and a guide, Gersom. The name of the city translates to “birthplace of the gods,” and its vast layout, including two pyramids (the Sun Pyramid and the Moon Pyramid), the Temple of the Feathered Serpent, and the Avenue of the Dead, gives credence to such a majestic name. The ruins reach about 8 square miles and archeologists estimate that, at one time, the city was home to 100,000 people. Gersom, our animated guide who described things in Spanish and in English while simultaneously illustrating concepts on a white board (very UDL), told us right at the start not to believe the things we read on signs about Teotihuacan. Recent technology has debunked much of what is written at the historical site. Archeologists are always discovering new things, disproving previous beliefs. Thus, at each sign, he would carefully point out everything that was untrue, righting the wrongs of archeologists past.

Looking down from the top of the Sun Pyramid, Teotihuacan

The Moon Pyramid in the distance, Teotihuacan

The Sun Pyramid, taken from half way up the Mood Pyramid, Teotihuacan 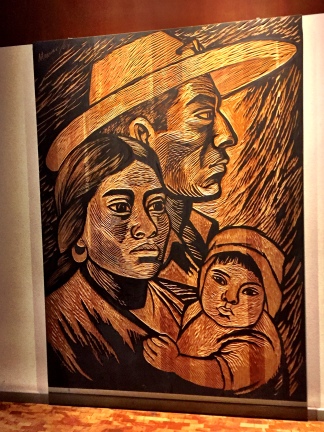 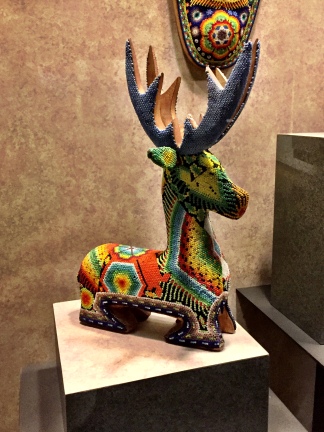 Gersom’s sentiment about “righting” historical claims followed us for the rest of our trip, especially to the Anthropology Museum, where we learned more about the ancient peoples who inhabited Mexico. There is a post about Teotihuacan and this museum in the making.

We took a day trip to Toluca. Our original aim was to see Cosmovitral Jardin Botanico, a building that was originally a market, but is now home to a botanical garden. It features 48 stained-glass panels by Tolucan artist Leopoldo Flores. As we have been studying large works of art, this place fit the purpose of our work. Our Red Tree House hosts mentioned that, while in Toluca, we should consider a hike at Nevado de Toluca, a stratovolcano that is either the fourth or fifth highest peak in Mexico City, depending on who you ask. After having hiked Tent Rocks in Santa Fe, we were eager to do more climbing. Little did we know that we would be hiking down (and up and up and up) a virtually unmarked trail in a cloud. We could not see more than a yard in front of us, and on three occasions lost the path. We had to listen for other hikers’ voices to find our way back to the car after making it to the crater lake, and when we got back to the car, we immediately started laughing, mostly out of relief–there were moments we thought we might never see it again. All in all, though, it was an adventure that, with slightly more attention to the weather, we would both attempt again.

Other points of interest in the Mexico City leg of our trip were: the Museo Frida Kahlo, Secretaria de Educacion Publica, the Diego Rivera Mural Museum (which houses exhibits related to Rivera, but not much of Rivera’s own art), Museo de Bellas Artes, Diego Rivera’s mural at the Olympic Stadium at the University, (there are several other extraordinary murals on campus as well), and several restaurants including Pujol (a restaurant known for its modern interpretations of Mexican dishes with an emphasis on local and indigenous ingredients including chicatana ants and maguey worm salt, as well as its 1334 day-old mole), Rosetta, Alipus, and El Moro, famous for its churros. Plus, lots of el pastor tacos! We are already planning our next trip to MXDC.

To The Red Tree House staff, we would have be lost without you and your suggestions and your maps; to Abril, our knowledgeable and hip Street Art Chilango Guide; to Gersom, our Teotihuacan illustrator and guide; to Ricardo, our driver and guide to Toluca; to Cait, for her suggestions and can’t-miss stops; and to Grant, Viv, their kids, Paulina, Susan, and the other Red Tree House guests–your fellowship is much missed.