What are the differences between murals, street art, and graffiti? And do those differences matter? While walking Mexico City (and we have definitely walked it–the Fitbit tells us we’ve walked 48 miles in the last five days), we’ve seen all kinds of work, from tagging to fully painted blocks of buildings. After our tour in The Mission District, we really recognize the value in having a tour guide when looking at street art in new cities. Our knowledgeable hosts at The Red Tree House directed us toward the organization Street Art Chilango, which did not disappoint. When we met our tour guide Abril Trejo, she started the tour by stating three defining characteristics that separate street art from graffiti.

The first, she told us, is material. Graffiti artists use only spray paint. Street artists, on the other hand, may use spray paint, paint brushes, markers, and other types of tools to put art on the walls. She mentioned that, though many street artists are former graffiti artists, others come from graphic design, architecture, or even illustrating backgrounds and thus have less experience with spray paint cans. Second, while graffiti is mostly word-based, street art is image-based. The image allows for more interpretation of art, whereas graffiti is literal whether the viewer understands it or not. And third, street art is created legally. Business and property owners in Mexico City often ask street artists to design on the walls of their buildings because otherwise they will be full of tagging. Graffiti artists suppose that, by tagging a space, they are taking what is rightfully theirs. In contrast, street artists make arrangements with owners to legally secure a space to work.

During the tour, our definition of street art expanded as we thought more deeply about the interaction between street and art. We learned from our tour in The Mission in San Francisco that murals are less likely to be defaced or tagged if the community respects the art on the wall. This is also true in Mexico City, but our guide gave us even more to think about. We saw the tension between street and art, in which the art pushes on the street, and, at times, the street pushes back. We saw mutual respect, lack of respect, and one benefitting the other. We learned that street artists in Mexico City are often commissioned to do advertisements or more directed work, which in turn supports their ability to do their own designing and artistry on walls around the city. Another facet of the interaction between street and art is that sometimes art groups encourage taggers to come over to “the good side,” finding them walls to paint themselves rather than tagging over others’ work. However, these invitations are not always accepted.

As Abril led us through the streets of Roma, Mexico City’s hipster neighborhood, every piece we encountered added nuance to our understanding of street art in this city.

Abril explained that when an artist has a wall, it is expected that the artist invite a colleague or two to share the space. In this way, artists get on many more walls. Plus, they work together, styles mixing. One of the first pieces we saw was a collaboration between Martin Ferreyra, an Argentinian artist, and Revost, a Mexican artist whose name is a combination of revel (rebel) and ghost. Revost only paints animals that are or were considered spiritual, and his contribution to this wall is the dragon on the left that wraps around the human-esque figure on the right. This work is a stellar example of artists melding styles to share a wall. It is also when Abril began to tell us about identifiable styles. Since street artists do not always sign their names, tracing their style (material, kinds of images they paint, etc) is a reliable way to identify an artist. It is also a reliable way to recognize taggers or bombers (tagging is usually thin letters noting the tagger’s identity, whereas bombing is much larger, often bubble letters perhaps accompanied by an icon). This piece of artwork has been bombed by a few, but the most notable is the cat-shaped signature in the middle. 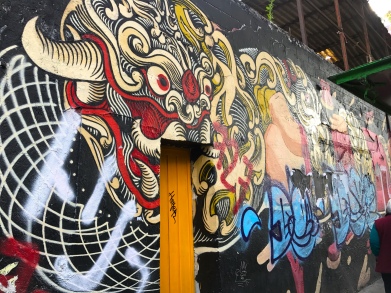 In 2014, ten works of street art were painted as part of Roma’s Art Walk. Artists were brought in from other countries, including Aaron Glasson, originally from New Zealand, now living in San Diego. Glasson’s work most broadly addresses his lived experiences, including the pieces that cannot be seen or explained. Abril told us that instead of a heart inside of the horse (titled Ano tel Caballo), he inserted a moon to illustrate the connection between the universe and living things on Earth. She also pointed out the rectangle that is slightly darker near the bottom in the background of the work. The work was tagged previously, and the neighbors decided to restore the background, in effect to remove the tag themselves. This is one example of neighbors defending the beauty of street art. 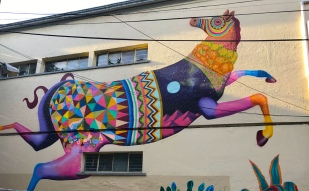 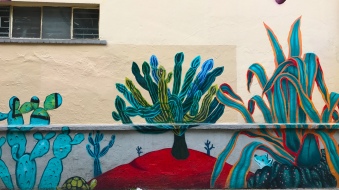 Another example of street and art interacting to add beauty is a red and pink mural that says “La vida esta completa cuando se comparte”/ “Life is complete when you share.” This work was done as a community project, and it is based on the broken window theory. The theory states that when a place is nice, the community and passersby keep it nice, but when there is already a broken window, litter, crumbling buildings, the community and passersby leave trash and add to the mess. In an effort to make this corner a cleaner space, the community painted the wall. The same group is in the process of putting up two more works in the Roma neighborhood for the same purpose. 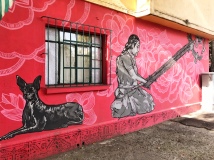 Ericailcane, an Italian artist sponsored by Galeria Fifty24, came to Mexico City and painted this work, titled “The Bunny and the Fox.” With the help of one assistant, it took him one week to complete. The artist did not volunteer the meaning of the work to the community, so, like much street art, it is up to the community to interpret what they see as they walk by. Our guide’s interpretation, based on her understanding of Ericailcane’s previous work and politics, was that the bunny represents small business, and the fox represents large banks. The fox is pleading with the bunny to let it go, making promises of kindness. However, it is in the fox’s nature to eat the bunny. The viewer watches the interaction between the bunny and the fox literally unravel, as the bunny eats the ropes that bind the fox, anticipating the harm that will befall the bunny once its work is done.

Street art also provokes a sense of nostalgia from the community. These two pieces, painted side-by-side by the same artist, Noble, evoke memories. Looking closely at the woman wrapped in the blanket, we could see that the blanket has fifty white stars set on blue, just like the American flag. Instead of red and white stripes, however, the blanket is a Mexican print. Designed by Nacho Becerra, this flag and the street art resulting from it, are reminiscent of a time in which US-MX relations were better. (Note how the caption reads Estamos Unidos Mexicanos, just one letter off from Estados Unidos Mexicanos.) Next to the woman wrapped in the blanket is a separate work by the same artist depicting the green taxis that used to flood the streets of Mexico City before they were deemed unsafe and not energy efficient (they had only two doors, and often a whole family would get into a cab, sit the children on the floor, and go to the park on a Sunday afternoon). They have been replaced with pink CDMX cabs. Above the cab is the phrase “I [broken heart] D.F.”, alluding to the moment in January 2016 when the capital city’s name was officially changed from Distrito Federal to Cuidad de Mexico. There is no more DF to love.

Neither the cab nor the woman in the blanket have been tagged at all. When Noble signs his art, he signs “NobleKFC.” KFC stands for Kings Forever Crew, a graffiti crew in Roma so large that other artists do not tag over their work in fear of retribution from one of KFC’s members. Noble’s art is protected by his old graffiti crew, keeping his artwork, for the most part, clean.

Below are several other pieces of art Abril showed us. Many of the artists were brought in by galleries for exhibitions and painted one piece on the street so that the community did not have to pay to benefit from the artist’s presence. Scrolling through, so many artists’ styles are evident.

Walking the streets of Roma with Abril, we saw more evidence of artists interacting with one another and the community than we ever would have on our own. We now know what to look for–be it the material, the specific tag, or a technique or style of a particular artist–when we come across art on our own. Abril mentioned at the beginning of our tour that graffiti art has an inside crowd. It doesn’t care if other people get it or not. Once doors started opening to allow us to understand the interaction between the art, the street, and the artist, it is impossible not to want to know more. 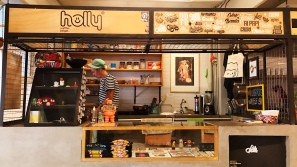 P.S. After we left our tour, we went to Holly Waffle, a Belgian Waffle storefront run by Bue the Warrior, one of the street artists whose work we saw with Abril and then several times more on our walk toward breakfast. Abril mentioned jobs of street artists ranging from musician, Coachella poster designer, clothing designer, label-maker for a Mezcal company, and graphic designer. She emphasized that the talent of these artists cannot be confined to street art, but instead enriches the city’s culture in multiple ways. Look out for a new Holly Waffle location in Guadalajara coming soon.