Now that we’ve left the country, we are having a hard time remembering all that we are thankful for in our last three US stops–we did so much! We visited San Diego, Tucson, and Santa Fe in six days, which was quite a bit of driving and quite a bit of seeing in a short amount of time. As we got closer to the physical border dividing the US and Mexico, we took note of the many ways that the cultures on either side come together to create food, architecture, art, and language that display the richness of synthesis. 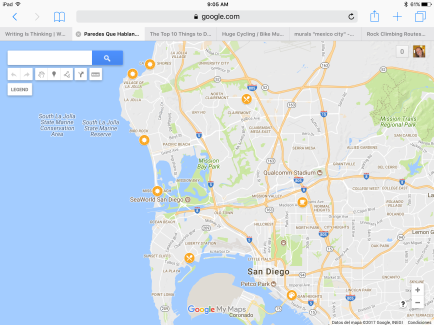 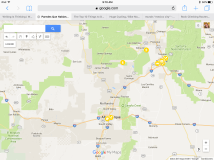 In San Diego, the main event was Chicano Park, which we would recommend to anyone visiting the city. A deep sense of community ownership and pride pervades the space, and the art takes on gentrification, displacement, climate change, and so many more social justice issues, connecting the struggles a community has faced in the past forty years with the power that has sustained Chicano culture for the past thousands. We also visited Tourmaline Beach (so many surfers) and La Jolla Beach for some reading and some processing time, and had a fabulous meal at Yakatori Taisho. We stayed in BTR Cohort 9 member BLee’s apartment, though ironically he was in Boston at the time, and the spirit of creativity, teaching, and joy that he brings to his classroom was ever-present in our San Diego learning.

Six hours in our car (dubbed Dusty Rose after so reliably driving through so much desert) and two blog posts later, we arrived in Tucson. The main event was a meeting with Dr. Curtis Acosta, which cannot be described in a single blog post, though we tried valiantly. The ideas that came up in our conversation continue to germinate as we see more and more in our travels. We also saw several murals in Tucson, the most striking of which was Joe Pagac’s mural on the side of the Epic Rides building in downtown Tucson. The mural has so much movement, as if the five characters are going to cycle right off of the wall and burst into the city itself. We also had a delicious dinner with Alice’s Aunt Mary, a long-time Tucson resident and hilarious conversationalist. After our meet up with Dr. Acosta, she added a resident’s perspective on the political climate and happenings, especially around immigration, in Tucson. 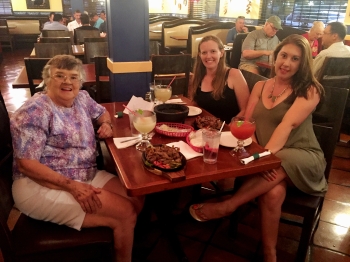 Our final US city was Santa Fe. It took us about eight hours to get there, and during our trip, we crossed borders in and out of Native territories. For the last hour or so of our drive and the first evening spent in Santa Fe, it poured. We had dinner at Izanami, and then headed to bed. We started our first full day with a green chile and bacon breakfast burrito at El Chile Toreado, which we ate on the way to hike El Diablo Canyon. The four-mile out-and-back hike took us to the edge of the Rio Grande. While hiking out, we crossed under a green fence with a sign that said “Property of the United States: All persons are prohibited under penalty of the Law from committing damage.” The signs did not tell us to keep out so we kept on the hiking trail, but all the while we wondered whether we were under surveillance of some kind.

Finally making it to the Rio Grande 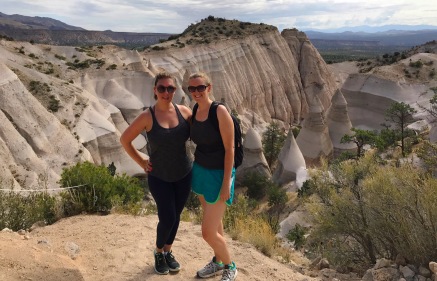 The next day we went to Tent Rocks before our visit to the International Folk Art Festival, a three day gathering of more than 150 artists from 53 countries. Not only is the Festival a space in which artists can make money to take home to their communities, but the mission of the festival is one of economic opportunity and social change. Artists who come to the market often go home to “build schools, bridges, wells, and community centers, purchase milking cows and medical supplies, and fight political dislocation, gender inequity, and other forms of social and economic oppression.” Besides the economic benefits of the Festival, its spirit is one of celebration as so many join together to display the most beautiful pieces from their homelands, made with care and tradition. At the festival, the feelings of fellowship, curiosity, and creation surround the crowd, making crossing borders–negotiating language, asking about method, and discovering newness–possible.

Now, off to enjoy the rest of our time in Mexico City!

To BLee (and Kiana!!), for the generous use of their apartment and the great San Diego recommendations; to Dr. Acosta, for his time,  his wisdom, and his willingness to share–we are keeping track of what is happening to MAS from the road; to Aunt Mary, for the dinner recommendation and the conversation; to Sam Keamy-Minor, for directions to breakfast burritos; and to Luke, our fabulous Air BnB host in Santa Fe.